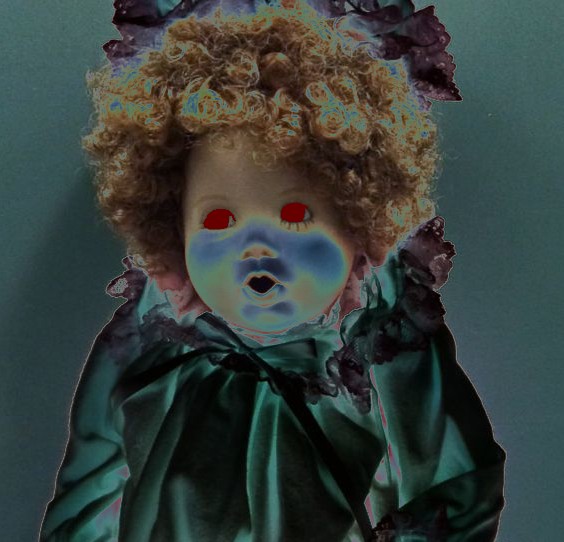 I was held captive last week by the story of the story of “the gated California community, where porcelain dolls were being left on the doorsteps of girls they hold an eerie resemblance to.” (Source: ABC News, including the alleged grammatical faux pas of ending in a preposition. Personally, I’m not a big stickler about that, although I probably would have reworked this sentence to read “to whom they bear an eerie resemblance.” But that’s just me.)

It has the makings of a great suspense novel, doesn’t it? Something out of “Where are the Children?” Rich people in a gated community, good clean decent people living the American dream. Loveable little ten year old moppets. An evil psychopath, watching, scheming. One by one, leaving creepy porcelain dolls on the front doorstep of his potential victims. The terror mounts. What do they mean? What will happen next?

I’m almost betting someone is writing the story right now.

Turns out the truth is a bit less sinister. The culprit? Not a sinister child abductor, but a little old lady with a huge porcelain doll collection, approaching the twilight of her life and looking to find a nice place for the babies she loves. I think it’s kind of sweet, and also sad that we immediately thought the worst of the situation.

Of course, perhaps it would have been wise to leave a note or at least talk to the parents, first. But then of course, that’s forgetting the fact that we are talking about a LITLE OLD LADY. In her mind, the anonymity, being a mysterious kindly benefactor, is probably part of the fun.

Oh, and by the way: I do find porcelain dolls creepy. Josie has one in a stroller at her house, an antique that was a gift from her mother. It’s terrifying. I don’t think I could sleep in that place any more, knowing it’s there and has the potential to terrorize me.

But aside from that, what kind of world do we live in where we automatically go to the sinister? That the media is right away contacted, that they of course see the news potential in the story, that they make a big deal out of it and fearmonger about it and it becomes national news? Think about it: this is mundane stuff. This should not be national news. This should be the stuff that small towns are made of. But we are so accustomed to the sinister potential in a plotline like that that we fail to look at the reality, focus only on the fiction. This is truly a “Culture of Fear” kind of situation. Our precious babies, terrorized by porcelain babies! Won’t somebody think of the children?

I mentioned to Corb that it would make for a great story, and of course, he did me one better, genius that he is. “You should flip it around,” he said. “Make it so that someone is dropping off ten year old little girls at the doorstep of doll collectors that look just like their dolls. Hello, here’s a little girl! See how they deal with that.”

I tell you, that guy should a writer. That idea is almost as good as our idea for a remake of Little Women, only featuring a cast consisting entirely of tiny female midgits. Can’t you just see it?

Oh, I just read that the little old lady has been identified and she says she is “embarrassed” by the whole incident. What is there to be embarrassed about? She was trying to do a nice thing! And even though it’s been proven to be completely innocent, the story is still told in as “creepy” a way as possible, to set the fear factor on eleven. I tell you, we live in a sad, sad society. Enjoy your twilight years, lady…and keep your creepy Chucky dolls to yourself!