T.J. Alexian lives in Attleboro, Massachusetts in a renovated green Victorian, along with seven ghosts and his long-time (and long-suffering) partner. He also has three kids and one spiritual kid, and their stories and their spirit form the heart and soul of his novel, Pictures of You. A profiled author in the Writer’s Digest book Writer with a Day Job and an award-winning communications specialist,  he has two novels available: Pictures of You and Late Night Show.

Pictures is a ghost story for the dispossessed, the novel tells the story of a young girl haunted by events in her past that never seem to die. But more than that, the novel is about being heard, about giving voice to voices that don’t fit the norm. Some that lack the courage…and some, that hide in the shadows.

Late Night is a recently-released techno-thriller with a voyeuristic “Rear Window” theme involving webcams, the dark underbelly of big soulless corporations, and a girl who just wants to be Queen on the Night. According to the description: The camera may not lie, but it doesn’t tell the whole story, either. That’s what Kami Corley learns one late night when she befriends a girl online and receives in return a disturbing plea for help. Although Kami wishes for more excitement than the flat Midwest town she’s living in, she never wished for what happens next. Instead of saving her new friend, she ends up seeing her murdered on-camera. Without knowing her real name or even her location, Kami doesn’t know where to turn for help. But as she uses the few clues she has to dig deeper into the crime, she finds herself caught in a web from which there is no escape—one that may lead to her own on-camera death, as well. Will Kami live or die when she is thrust into the very heart of a secret organization known only as the GKS? Without warning, she’s become the one on the inside looking out—and very well may be the next one chosen to play the deadly midnight game known as the Late Night Show. 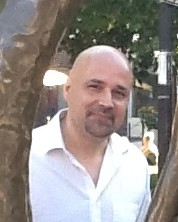 One thought on “About TJ Alexian”